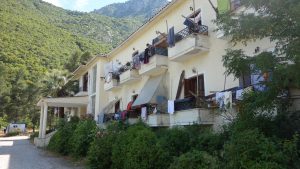 As moving as our first day’s shoot was at Tavros, it was just a foreshadowing of the amazing time we spent in Thermopyles, our first camp visit. Thermopyles is outside the city of Lamia, several hours north of Athens. It was well known as a hot spring resort, but had fallen into disrepair several years back and had been shut down. When the crisis hit, the borders were closed and it was clear that many refugees would be staying in Greece for longer periods. Journalist Yiorgos Palamiotis proposed that it be turned into a camp and within 48 hours, Yiorgos Bakoyiannis, head of the local prefecture had approved it and refugees were headed there. Here is a clip from our interview with Mr. Bakoyannis where he describes the local response to the influx of refugees.

I have visited refugee camps in many countries and this is the first one I would ever have wanted to stay in. The natural setting is stunning, under an almost mystical mountain. It’s very easy to imagine the Spartans there in their immortal battle against the forces of Xerxes. The camp itself is filled with pine trees and it’s green and cool, a healing environment. Beyond that there are no fences anywhere! Here, Aris Sohos, co-administrator of the camp, tells how it is different from other camps.

Our time at Thermopyles brought home for me yet again a basic rule of documentary filmmaking and journalism in general: Don’t rush and don’t push too hard. Take your time to get to know people and to let them find their comfort with you. No matter how ambitious your schedule or how pressed for time you might be, just to rush in with your cameras and start shooting will only alienate people. Fortunately, Zaphiri had been to the camp on a scouting trip and spent time to get to know most of the staff, so there was already trust there. As the days went on, more and more refugees came up to us to tell their stories.

Here are short clips from two of our people, Saddam and Omar, both from Syria.

The last morning we were in Thermopyles, I managed to spend an hour alone, as the camp was sleeping. With so much time on their hands and no work outside their contributions to keeping the camp clean and to cooking and cleaning their own rooms, the refugees tend to stay up late and sleep late. At the entrance to the camp is an abandoned and derelict gas station and snack bar.

Built in the early sixties, it took me back to my first trip to Greece with my family, when I was 9 years old. How alien and wonderful Greece and Europe was to me then, how many times I’ve visited it since and the people I’ve known. Standing under that timeless mountain, breathing the gentle pines, thinking of the ancient Greeks, and how time moves on, reflecting on the loss the refugees have suffered in our time, I was very much in the present moment while feeling history rolling out before me. I felt my small but true place in this human unfolding.